After mating throughout June our male cassowary (“dad”) disappeared, presumably sitting on a new clutch of eggs, while the local female continued to visit our garden infrequently.

She was here a few days ago, and after eating some palm fruits and lilly-pillies, made a deep, booming call. Shortly after that, there were two adult cassowaries drinking from our pond – dad was back!

Apparently he had been off his nest for a few days, abandoning it – maybe driven away by the pigs, which have been around recently.

Something looked strange about the female, and then we realized she was a stranger! She is at least as tall as “Missy”, our resident female, but with a taller casque and dark blotches on her two red wattles, one of which has two tips.

She might be the one who had a fight with Missy near “Cassowary House” recently.

Presently we are seeing dad always in the company of the new female, while Missy has been busy chasing the 10-month-old juvenile, which is, surprisingly, still visiting the area.

There does not seem to be a lot of ripe fruit available in the forest at the moment, but cassowaries also eat fungi and animals like worms, grasshoppers, mice and lizards.

Hopefully, dad will be able to put on enough weight to sustain him through another period of brooding. Male cassowaries sit on eggs for about 2 months without feeding. 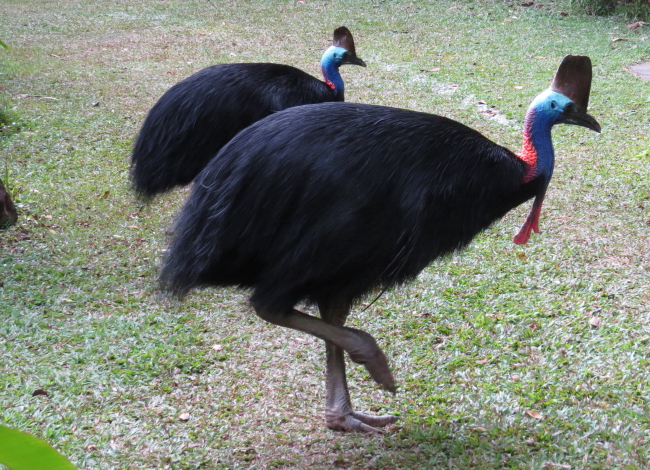 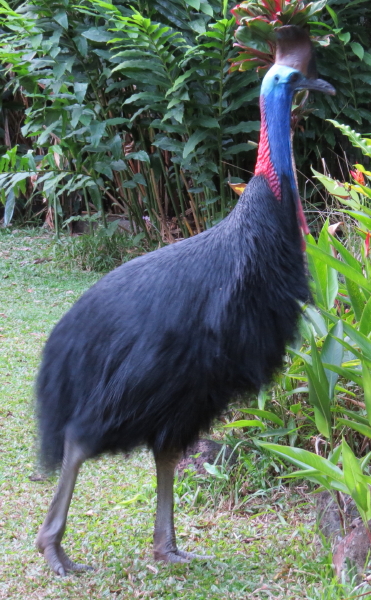 The September issue of the “National Geographic” magazine has an article on our ‘Big Birds’, with more photos of  Dad, Missy, and last season’s chicks.