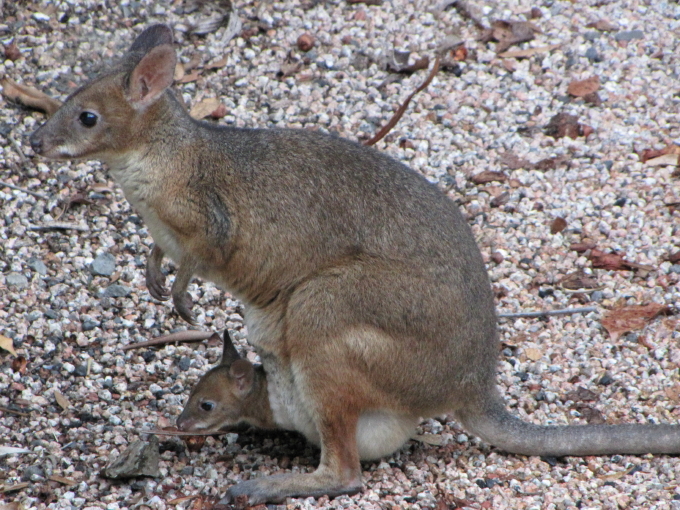 Red-legged pademelons (Thylogale stigmatica) are usually solitary animals, but might be feeding together occasionally.
They graze on our lawn, but mostly browse on leaves, flowers and also eat fruit ( in this photo: native mangosteen).

At the moment two of the females have pouch young, who have started to explore the outside world.
( Joeys have visible hair at 19-21 weeks, take their first steps outside the pouch- indicated by dirty feet- at 22-26 weeks and leave the pouch at 26-28 weeks of age).

They first leave the pouch in the typical fashion of all kangaroos: they fall out.
The mother is in control by either tightening her pouch muscles to firmly keep the baby inside or by relaxing the pouch opening and letting the joey fall out.
She can even actively tip it out by contracting the pouch – when she wants to clean it without the young inside, for example.

This young female has barely reached sexual maturity, being just one year old and has attracted the interest of one of the big males.
Characteristic for kangaroos is his behaviour: he approaches her, sniffs her cloacal region and her pouch opening (often not too gently!). He also grasps her near the base of her tail. ‘Chesting’, standing in front of her and grasping her head, is another courtship behaviour.
He is making the soft, clicking sounds, she is not ready to mate and rejects him by moving away and making the harsh, squeaky, rasping sounds.

More on the biology of the larger kangaroos can be found in Terence J. Dawson’s book: “Kangaroos” (CSIRO publishing).

2 months after starting to travel together and mating quite often (we watched them several times in our garden), with her seeming more interested in sex than him – apparent by her sitting down invitingly and him often just ingnoring her- he is still not brooding the 8 eggs, which she has already laid.
This would be a very large clutch, indeed. We can’t image how he could raise so many chicks; usually he turns up with 3 and they seem to wear him out quite a bit.
The first eggs were laid more than 6 weeks ago; how long can they survive in the open without being incubated?
This year’s 2 chicks have separated and are growing fast, with visibly blue faces and necks developing.